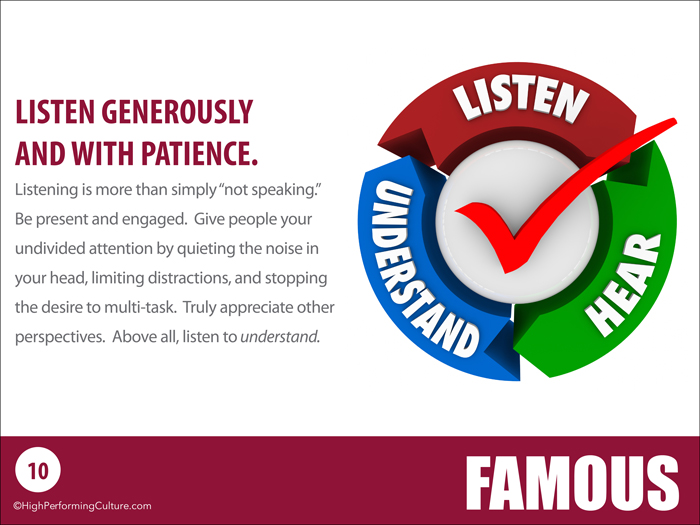 10. Listen Generously And With Patience.

Listening is more than simply “not speaking.” Be present and engaged. Give people your undivided attention by quieting the noise in your head, limiting distractions, and stopping the desire to multi-task. Truly appreciate other perspectives. Above all, listen to understand.

Of all the Fundamentals, this is the one I struggle with the most.  What is ironic is that it should be easy, considering I have two people in my life that set great examples growing up: my parents.

As a child, I saw firsthand the power of listening generously.  I remember being 13 years old and my father inviting me to play golf with him and two customers.  One customer was from Pittsburgh and began to tell me and my father a story about how he once met Bill Mazeroski.  For those of you who haven’t heard this name before; Bill Mazeroski was a 2nd baseman for the Pittsburgh Pirates from 1956-1972.  He is famous for one thing: in 1960 he hit a walk off home run in Game 7 of the World Series.  Still today, he is the only player to ever accomplish this feat.

Over the course of 20 minutes, the Customer told me and my father the story of meeting Bill and, as a lifelong Pirate fan, how much of an impact it had on his life.  My father was curious, engaged and enjoyed every moment of the story.

Ironically, I was with my father at a charity event about 6 months prior to this and we had won a raffle with the prize being an autographed Bill Mazeroski baseball.  So for the entire story I was waiting for my dad to bring up the baseball.

But he never did.

Afterwards, I asked my father why he didn’t bring it up.  He explained to me, that the entire time he was listening to the story he was entirely focused on our Customer and could see and feel his passion.  By bringing up the baseball, it would have “taken the wind out of his sail.”  So often, when we have conversations, we have a voice in our head that is trying to think about how we should respond.  Often, it leads to “one-upping” someone with a story, or not even understanding what they truly were trying to say.  It’s difficult to stay focused, present and to truly listen, but when we actively practice listening generously, it’s incredible the impact it can have on people.