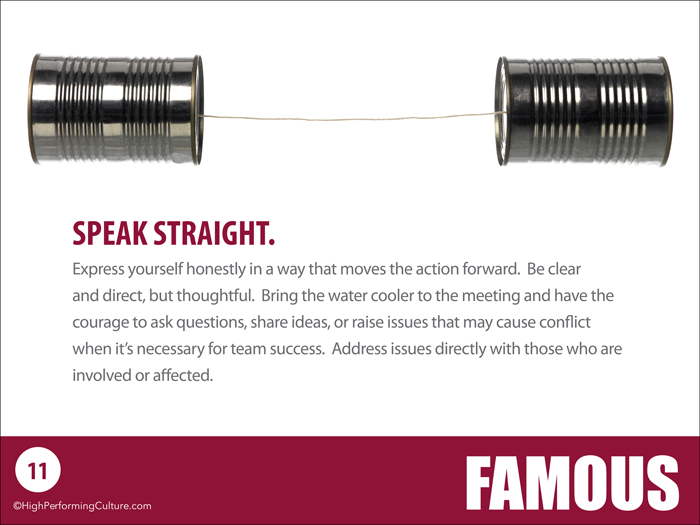 Express yourself honestly in a way that moves the action forward. Be clear and direct, but thoughtful. Bring the water cooler to the meeting and have the courage to ask questions, share ideas, or raise issues that may cause conflict when it’s necessary for team success. Address issues directly with those who are involved or affected.

As I am thinking about this Fundamental, I am reminded of when I was young.  I was not one to get involved in a lot of conversations because I was kind of backward and shy (Yes John, it was hard to get a 5 minute conversation out of me).  As I started in the work force it became evident that I had to change and develop better communication skills.  I found out quickly that there can be two very different outcomes to the same situation depending on how the situation is communicated.

For example, I have a mentor and we will call him Joe who is a great person has a lot of great thoughts and Ideas, but when it comes to putting the plan into action Joe will make an effort to Speak Straight.  He will tell you what he wants done, how he wants it done and what will happen if the project is not completed on time.  I have found that in this situation your project is doomed to fail based on the way it was communicated. Again this was a great project with a lot of benefits for the company however everyone involved walked away from the meeting upset because they were not involved in the planning of the project and the potential progress.  They came away from the meeting asking how can we get off of this project.

I have another mentor and we will call him Sam that is not as outgoing as the Joe, but has learned how to Speak Straight and get everyone to buy in to the project and be excited about the opportunity to be involved.  Sam can ask the tough questions in a way that does not cause conflict.  He explains the scope of the project, discuss his thoughts on how to move forward and ask the team for their thoughts.  Everyone came away from the meeting energized and ready to start!

In the two examples you read above, both projects are the same with the same projected outcome.  Both Joe and Sam made an effort to Speak Straight as they both were speaking honestly with the hopes of moving the project forward.  However, Sam’s approach made all the team member’s feel that they were a vital part of the project. And they came away feeling highly respected.

Both Joe and Sam felt they were Speaking Straight and communicating effectively.  However, only one of them was not only being clear and direct, but also thoughtful by asking questions and allowing the team to share ideas and voice concerns on issues.

Which project do you think got completed in a way that helped grow the company?

In closing, as you move forward not only at work but in your life, how will you Speak Straight?