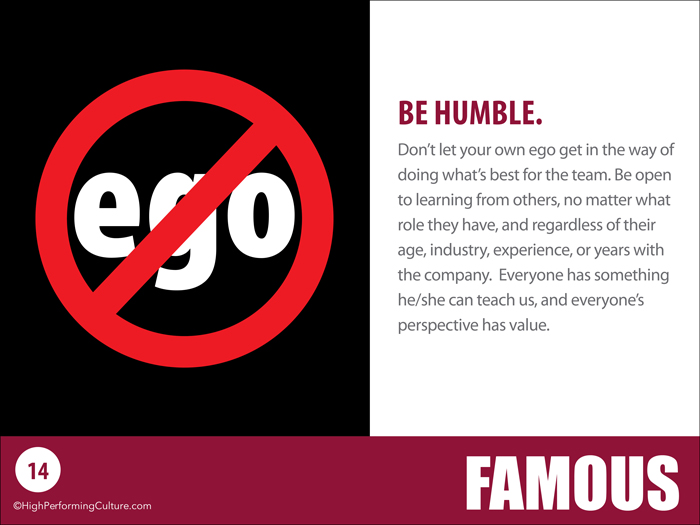 Don’t let your own ego get in the way of doing what’s best for the team. Be open to learning from others, no matter what role they have, and regardless of their age, industry, experience, or years with the company. Everyone has something he/she can teach us, and everyone’s perspective has value.

Of all our 40 Fundamentals, the behavior of ‘Being Humble’ speaks to me in a very special way.   As the description, no matter the role one serves, everyone’s perspective can provide value if we allow ourselves to listen. This can apply to any organization, group, or even at home.

Being an avid baseball fan, I am reminded of a recent interview from a ‘bench-player’ of the Cleveland Indians about the head coach of the team, Terry Francona.

Those that follow baseball know that Terry Francona has a long list of accomplishments as a player and coach. Much of his success & notoriety has been in recent years as his teams have won more games than any team in the American league over the past five years. Terry Francona is an authority on the game of baseball and there is very little you can tell him that he probably doesn’t already know.

In the interview with the player (who isn’t a superstar and doesn’t see much playing time), the reporter asked for his opinion of Francona as a head coach.   In reply the player paused for a moment to collect his thoughts and then responded in short by saying; “the coach always wants to hear what I have to say; he really cares about each of us (players) and how things are going. Coach is an extremely busy person but always finds the time to sit and listen to our thoughts and ideas for improving the performance of the team.”

Wow! As I listened to the interview, the words the player was sharing and the sincerity with which he talked about his coach blew me away. It showed me that even at an elite level as professional team sports, it is important to intentionally engage others no matter the role or position; even if we’ve ‘been there / done that’ as a Terry Francona has in baseball.

A good example of putting this Fundamental into everyday practice at Famous can be seen at our Cleveland-West branch with our CSM, Dale Kosco.   Our Cleveland-West branch has impeccable inventory accuracy.   In a recent audit of their inventory the test counts resulted in a score of 100% accuracy.   A perfect score!!   As I had the chance to follow up with Dale to understand how he achieved this type of results, his response was simple. He gave all of the credit to the focus and hard work of the Cleveland-West associates. Never once did he speak of his leadership or personal efforts.

As I reflect on each of the roles I play during the course of a day (husband, father, Famous associate, and many others), the Fundamental of ‘Be Humble’ has been a helpful reminder for me to maintain an open mind to different opinions, and to be more intentional in actively seeking out other perspective for achieving the greatest value of any given opportunity.