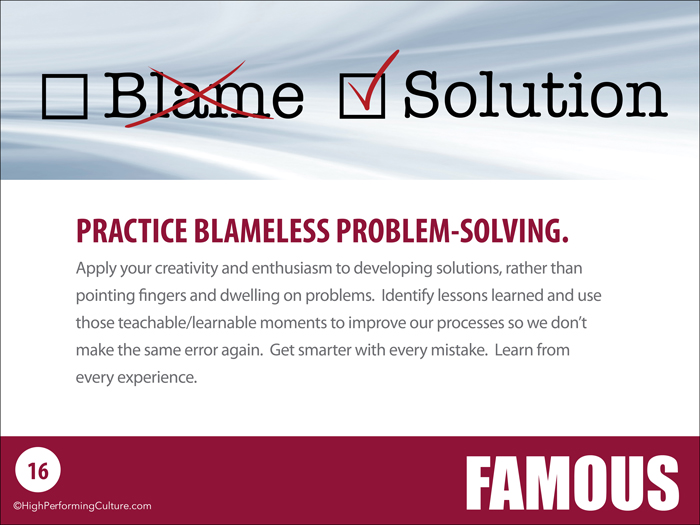 Apply your creativity and enthusiasm to developing solutions, rather than pointing fingers and dwelling on problems. Identify lessons learned and use those teachable/ learnable moments to improve our processes so we don’t make the same error again. Get smarter with every mistake. Learn from every experience.

In 8th Grade I played defense for my school’s soccer team.  We were tied 0-0 late in an October game and out of the corner of my eye I saw the opposing team’s striker cut wide open through the middle of the field.  Across from me, our opponent’s forward crossed the ball into the box.  One of my teammates tried to “clear the ball” but unfortunately, he didn’t strike it cleanly and ended up kicking it into the back of our own net.  In soccer lingo, he committed an “OWN GOAL.”  We lost 1-0. The next day at school he was ridiculed.  He was effectively shunned by our entire team.

I felt awful because I know he didn’t try to hit it into our net.  In fact, if I was truly trying to place blame, I could look at our entire team.  When the opposing striker ran towards the goal I could have left my area to cover him.  Our goalie, when seeing the cross, could have aggressively pursued the ball.  Our sweeper could have been in better position to make a play on the ball. If our offense had held onto the ball in the first place none of this would have happened!

The list goes on and on…and by placing blame, we really don’t accomplish much.

What is important is this: We win and lose as a team.

Mistakes will inevitably happen.  The reality is, we had a defensive breakdown.  Rather than point the finger; we should have looked at that game as a way to improve as a team.  We could have learned from our loss and gotten better.

At Famous, we make mistakes.  They’re a part of life.  It doesn’t matter who makes a mistake, because when they occur, in the mind of our Customer: Famous made a mistake.  We need to ask ourselves: Why did this error take place?  What can we do to improve?  How can we learn from this and get better? What preventative measures can we put into place?  Can we provide additional training?  Should we update our process?  And most importantly, when our teammates make mistakes, we need to build them back up, rather than put them down.  Let them know that we have their backs, that we are there for them and that we have an opportunity to learn and get better.