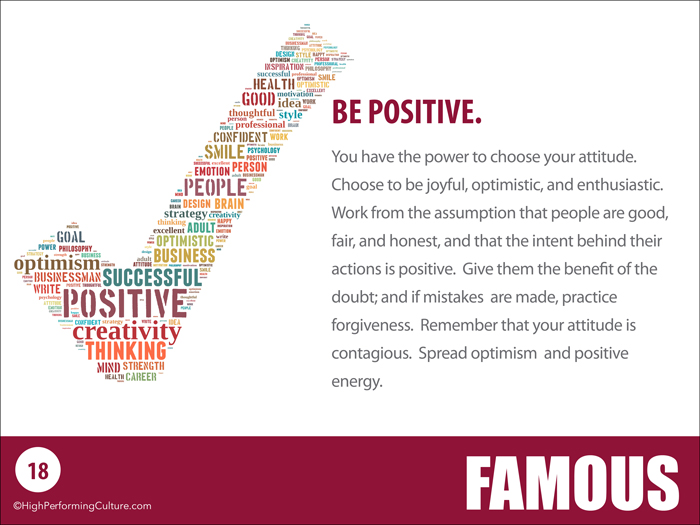 You have the power to choose your attitude. Choose to be joyful, optimistic, and enthusiastic. Work from the assumption that people are good, fair, and honest, and that the intent behind their actions is positive. Give them the benefit of the doubt; and if mistakes are made, practice forgiveness. Remember that your attitude is contagious. Spread optimism and positive energy.

Thomas Edison didn’t invent the incandescent lightbulb.  In fact, the incandescent lightbulb was invented years before he was even born.  However, early lightbulbs were extremely unreliable and would only last minutes at a time.  In order to sell a lightbulb, he had to invent a version that would last months, even years.  For years he tried new filaments and tweaked his design until he eventually developed a lightbulb that was reliable and affordable.

What set Edison apart from other inventors had very little to do with intelligence.  In fact, many inventors of his time had much more schooling and were much more technical then he was.  They even mocked his “guess and check” style of inventing for being unscientific.  But what Edison had was an unwavering belief that anything is possible.  His determination led him to a solution, when hundreds had given up, thinking it couldn’t be done.  Without his positive mindset he wouldn’t have been able to persevere through years of failure.  In fact, what others viewed as failure, he viewed as success.

In life, there are many things beyond our control.  One thing we can absolutely control is our attitude.  Each day we have a choice when we wake up: we can be positive, optimistic and open minded or we can be negative, pessimistic and close minded.  The way we look at a situation is completely up to us.

I believe the best way to have a positive attitude is to keep life in perspective.  Think about what is important to you, whether it be your family, your religion, or your values, and “don’t sweat the small stuff.”  Have gratitude and be thankful for what you have rather than lamenting for what you don’t.  And always remember, positivity is contagious!