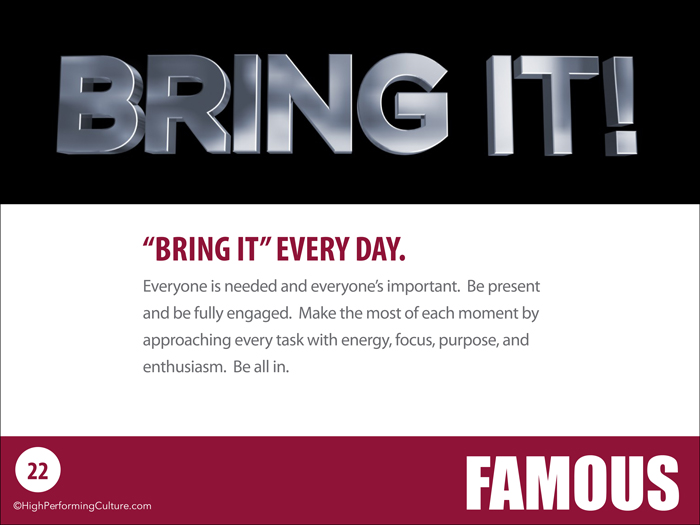 Everyone is needed and everyone’s important. Be present and be fully engaged. Make the most of each moment by approaching every task with energy, focus, purpose, and enthusiasm. Be all in.

When we were putting together these fundamentals and going through the final drafts, I was talking about them with several individuals.  I asked Brian Blaushild which were some fundamentals that he loved, and he said, “Bring It” was one of his favorites.  After thinking more about it, I now understand why this one means so much to him.  I admire Brian for many reasons, and one is his drive, determination, and enthusiasm to bring it every day.

He’s been doing this since he was a young boy.  I remember when he was in first grade, and he was doing homework at the kitchen table, I looked over his shoulder and asked if he needed some help.  He looked at me kind of funny, and said, “No, I’ve got it all under control.”  He had an organizer, and I saw his to do lists for math, spelling, and other subjects.  He had little check marks for what he had completed as he was preparing for the next school day.

His approach to life and business is no different today than it was then.  He thinks about the future, puts together a plan, and takes the necessary actions to achieve his daily goals.  To this day, he even keeps a journal of what he wants to accomplish each day and the results of those previous 24 hours.  Simply, he brings it.  They say that a lot of things skip a generation (well maybe not the hairline), and I must say that Brian may have inherited some of that passion and zest for life and business from his grandfather, Jay Blaushild.  When I went to visit my father in the hospital several times over the last month, I am almost embarrassed to say that he was “bringing it” even as he was hooked up to IV’s, regarding the business and so many things we were working on.  Jay and Brian exemplify what it takes every day to create the energy and sense of purpose to push forward regardless of any issues, roadblocks, or challenges that may exist.

There are so many other associates at Famous that bring it every day.  These people set the tone and pace for other associates as well.  Some to come to mind are Lora Yakubik, Ken Blankenship, Dave Figuly, Shelly Briselli, and Lynn Moon, to name a few.  I’m proud of this group of key people and so many others throughout the company.

During David Friedman’s cultural rollout with us, he gave the example of Taylor Swift being on stage to start a concert, where the lights go down and the curtain comes up.  He said, “Imagine if she came out on stage and said to her audience, I didn’t get much sleep last night.  I’m really tired.  I had no coffee today, so my first set of songs probably won’t be up to par.”  How would you feel if you paid your hard earned money and were a fan / customer of hers that night?  You probably wouldn’t be too happy.

Well, the team of people that I mentioned doesn’t let others know that they are tired or have too many things to get done in not enough time.  They somehow figure out a way to accomplish the task at hand and do it in a way that leaves the customer feeling good about doing business with Famous.

I appreciate all of you who “bring it” in your daily actions, and so do all others that you deal with, I’m sure.