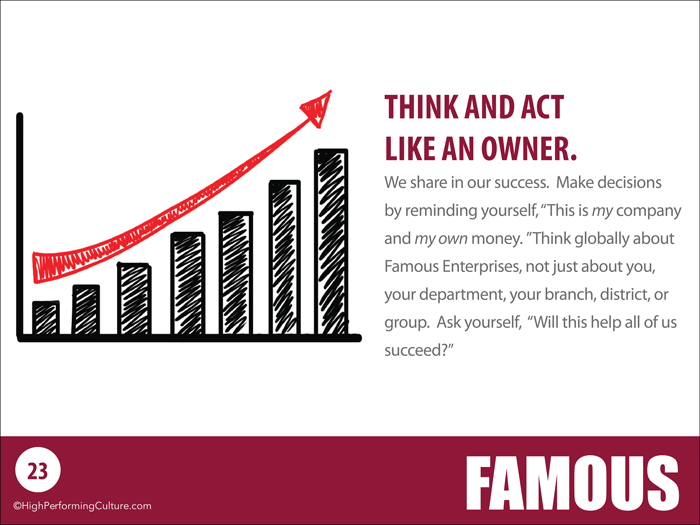 We share in our success. Make decisions by reminding yourself, “This is my company and my own money.” Think globally about Famous Enterprises, not just about you, your department, your branch, district, or group. Ask yourself, “Will this help all of us succeed?”

An old man and his wife walk into a hotel on a rainy night in Philadelphia. The manager tells them no rooms are available, and gives them his own room at the hotel. The old man was so impressed that a few  years later he hires that man to manage a new hotel he was opening in New York City. The old man in the story was William Waldorf Astor. The hotel he opened in New York was the original Waldorf Hotel, which later became the famous Waldorf-Astoria. The manager, George C. Boldt, thought and acted like an owner, or better yet, like a good owner.

There are good owners, and there are bad owners. People who own businesses are sometimes jerks, yet they still think and act like owners.  Their thinking and acting can be so self-centered or off base that no one wants to work for them. Or, those that do are always looking for employment elsewhere. George C. Boldt thought and acted like a good owner. He made the customer’s problem his own (no rooms), found a solution (he had a room), made a sacrifice (he gave the couple his own room), and he received a reward for doing so (promotion).

Now, if you’ve never been an owner or an executive who called all the shots, then how do you think and act like one? READ BOOKS BY SUCCESSFUL BUSINESS OWNERS!

Just imagine what Famous Supply would be like if we all did this.

Get this one fundamental down, and all the others will fall into place.