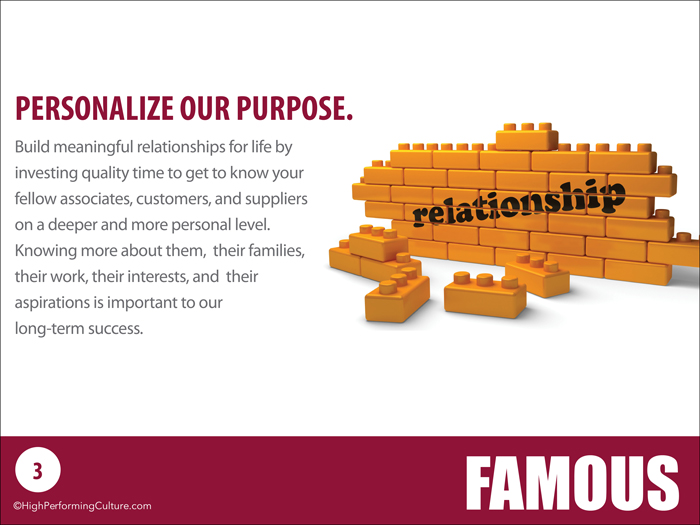 Build meaningful relationships for life by investing quality time to get to know your fellow associates, customers, and suppliers on a deeper and more personal level. Knowing more about them, their families, their work, their interests, and their aspirations is important to our long-term success.

The opportunity for a relationship often presents itself in-opportune times. It could be from an upset customer or from someone you see daily, but only in passing. Or, it could come from an unforeseen situation as it did for me.

Some years ago, a major manufacturer recruited me to oversee a distribution center and regional sales efforts.

The current distribution manger was at an Industry Golf Outing when he received a phone call from his direct report requesting to meet for dinner that night. At that dinner he was told he was being replaced (by me) the next morning, and that the company hoped he would stay on the team in a sales manager role. An all-employee meeting was called for the next morning where I would be introduced as the new leader.

We held a short sales meeting where I got to know the people and laid out my expectations. Even though this gentleman and I had been in the same market for about 12 years, we had never met face to face before, but we knew each other by reputation.

After the meeting, I then took the gentleman whom I was replacing to lunch and asked him to stay on as my sales manager. First, I made the point to get to know him on a personal level to build a foundation for the relationship. Once we had broken the ice, I stressed that we were now on the same team, and that he knew my reputation and could trust me. I suggested that he call some of the dealers we both knew to get a feel for my character from a customer’s point of view. I assured him that even though I was replacing him in his role, we would be working together and I would empower him to lead the sales force. It took a couple of days, but he agreed and over the next 5 years we increased the distribution center sales by over 800%.

We must all be prepared to quickly assess situations and personalize our purpose to build meaningful relationships with those we encounter.