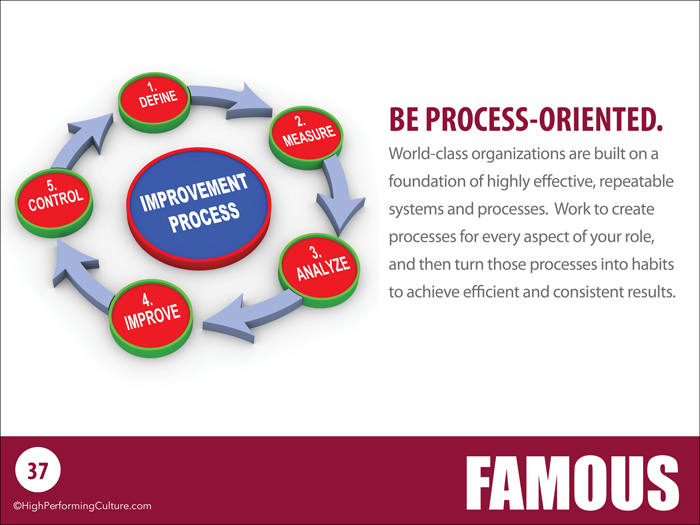 World-class organizations are built on a foundation of highly effective, repeatable systems and processes. Work to create processes for every aspect of your role, and then turn those processes into habits to achieve efficient and consistent results.

Many years ago, before the days of automation, a young man was hired to paint the yellow lines in the city streets. His supervisor took him out to the corner where he was to start and explained the process to him. He set the bucket down and painted the two parallel lines. He handed the brush to the young man and watched him paint the lines for a few feet. Satisfied with the result, he left the young man to his work.

The young man arrived early the next morning, took his bucket and brush and headed out to work. When he returned at the end of the day, the supervisor asked how many blocks he had done that day. The young man said “15 blocks”. Still impressed, the supervisor told him he’d done a great job, and would see him in the morning.

The supervisor became concerned, however, over the next few days. The young man had started out strong on Monday, but by Thursday he had only done 5 blocks. The supervisor asked the young man on Friday morning about this decrease in productivity. He wanted to know if there was something that could help the young man increase the amount painted every day. The young man replied that each day the bucket was getting farther and farther away from where he was painting and if he could move it with him it would speed up the painting.

The moral is to make sure we always examine the process for effectiveness. Everyone needs to feel comfortable bringing suggestions about how we can improve. Leaders must ask for feedback, and create an environment where associates feel comfortable providing it. Even the newest associate might have a better idea.