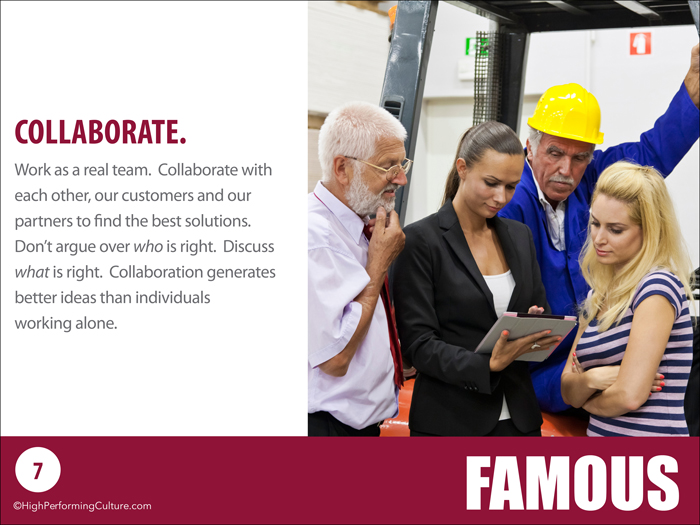 Work as a real team. Collaborate with each other, our customers and our partners to find the best solutions. Don’t argue over who is right. Discuss what is right. Collaboration generates better ideas than individuals working alone.

As you know, we have five core values:  Family, Trust, Communication, Teamwork, and Continuous Improvement. These will all stand the test of time.  The fourth, teamwork, is all about collaboration.  I’m sure you would agree that conceptually, teamwork is a pretty easy philosophy to grasp.  We all understand it and can see the benefits when collaboration works, and the issues that crop up when it doesn’t.  But in reality, where the rubber meets the road, teamwork and collaboration is hard for a lot of people and companies.  Why is it so tough?  Well, it has been studied and analyzed, and there is no shortage of ideas on this subject.  But in my humble opinion, if I boiled it down to one basic reason, I would say ego and politics.  Simply, we cannot and will not allow any of our people to play political games and have their role be about them or their ego.  It’s team first.  It’s team second.  It’s team third.  There is no room at Famous for associates who want it to be about them or for anyone who plays political games to benefit them in their career.  It just doesn’t work that way at Famous.  Our culture is about the team and working as one to serve our internal and external customers.  We are about giving credit and recognition to others, especially those in support roles who are our unsung heroes.

One of my all-time favorite football coaches, Bill Walsh had a pretty good quarterback named Joe Montana.  You know how many game balls he received during his career?  Very few.  It wasn’t about Joe.  It was about the team.  In fact, at the quarterback position, his role was to help build the team and make it better.  Not to get or take credit for a win.  That was his job.  Yes, at special times, he was recognized by his coach or organization for a job well done, but those accolades were few and far between, and usually were connected to achieving big goals, like winning championship games.  It was all about the team and getting everyone on the same page and in alignment so they could collaborate and execute their game plan.  Those that focused on those objectives and had those values were able to stay with the team.  They understood their team oriented, ego-less, political-less, core values and culture.  Those who were focused on the wrong values and philosophies were not allowed to stay with the team.

I truly believe there is great beauty and comfort in working for a company that genuinely values the entire team over any one individual, including the coach, a star quarterback, or any other member of the organization.  I genuinely hope it’s everyone’s desire to collaborate and work together as one team.  Not only is the potential outcome always better, but the journey is more rewarding and enjoyable as well.